Casinos, binge drinking and the most over the top hotels you can imagine- Macau is an odd country to get your head around.  Reeking of wealth and extravagance, it’s technically owned by China but was founded by the Portuguese, giving it an odd mix of inheritance.

We checked into our hotel, the same one we go to as a group every year- the Grand Coloane Resort on the beach.  Being a bunch of teenagers, our thoughts strayed to obviously the most important issue needing to be addressed- where the fuck do we get the alcohol?

We set off into the heart of Macau, where hotel after hotel towered above us, The Venetian to our left, the Hard Rock Hotel to our right, and countless others in between.  We were just a band of 8 teenagers trying to navigate this complete maze of craziness like ants.

Our first mistake was entering the Sheraton hotel in an attempt to find a 7 Eleven (aka Tesco’s).  Most of the hotels are connected in some way, meaning you could be stuck in them for literally days.  We looked up our destination, and hopped into two separate taxis and drove into Old Taipa, the ‘real’ Macau where its’ residents live away from the tourist hotspot.

Our second mistake was getting into a taxi with a driver who spoke no English- he left us in what might as well have been the middle of nowhere.  Missing half our group, we wandered around taking photos and procrastinating on creating a plan as to what the hell to do next.  To our utter joy, the other group arrived in their taxi and we set off to complete our increasingly difficult mission.

Like an oasis in a desert, a 24 hour supermarket popped up in front of us.  We ran in, 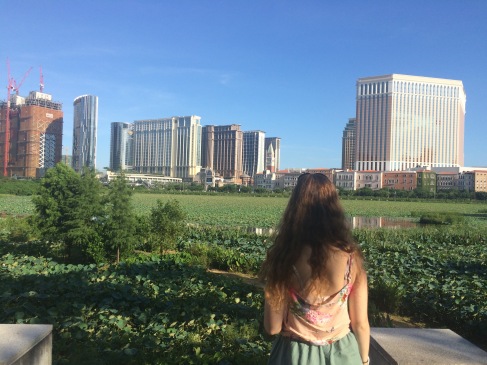 cooling our dripping bodies in the arctic air con, and set about picking up what was probably way too much alcohol.  Armed with seven bottles of spirits, nine bottles of mixers and some crisps for good measure, we exited happy and looking forward to the evening ahead.

Until we met mistake no. 3.  We had not thought about how we were going to get home, and so of course, as is every time you’re confronted with a lack of taxis, the general plan was to ‘walk around’ until one came along.  And that is how we ended up walking the entire 20 minute taxi journey all the way back into Macau, weighed down by bottles in a 36 degree heat.

But that was nowhere near the end of it. Our fourth mistake was entering The Venetian from the back; we spent the next half an hour walking around trying to find the exit in time to get the shuttle bus back to the hotel.

We luckily did not die of old age in there and found our way out in what we thought was just in time for the shuttle bus.. except it never came.  We waited and waited, drinking half our mixers in the process and finally decided on walking across the four laned carriage way to the Conrad Hotel to be met with another 25 minute long taxi queue.

Drowning in our own sweat, we then saw the shuttle bus drive past us, kicking up a cloud of dust in it’s wake.  Raging now, we sat and waited for next, on which the driver almost refused us entry until we forced our way on, ignoring his protests (our fifth and final mistake). We soon found out why.

He drove us back to Old Taipa, which we had spent an hour walking back from, across the drawbridge into the next part and to the ferry

pier, and by now it had been five hours since our departure.  And still headed in completely the opposite direction to our hotel.

Finally, after travelling what had been basically the entirety of Macau we made our way back to the hotel, blasting tunes in the mini bus and looking forward to a well earned drink.

Have you ever been to Macau? What did you think? Tell me any crazy adventures you had in the comments below!