I recently talked about what I was packing for Bali in my Pacsafe Travel Luggage pieces in this blog post, and now the time has come to review them!  Pacsafe is a company which specialises in anti-theft travel luggage, and boy are they serious.

I ordered three different items: a Pacsafe 45L Travel Backpack, a Day Backpack and a Portable Safe, as well as a couple of locks.  Each comes with various safety features to give you added peace of mind when travelling.

Starting off with the travel backpack; what an amazing piece of luggage to travel with.  I tested this out in Indonesian heat, travelling as a backpacker and it didn’t disappoint.  It zips open completely like a suitcase, but is worn as a backpack, with thick shoulder and hip straps to diffuse the weight evenly; no back pain with this one!  When I didn’t want the straps flapping about, I could tuck them into the back of backpack to make it more convenient to carry around.

On the inside of the material is a built in slash-guard, a wire construction unique to the

company.  This means that if someone were to attempt to cut into the bag, they would be prevented from doing so by the slash guard, therefore keeping them from getting to your belongings.

Three other safety features concern themselves with zips and pullers.  The zips are puncture resistant and can’t be split through with sharp items such as ballpoint pens.  The pullers also lock together, and slip onto the anchor lock which has to be undone before the pullers can be moved to open the bag.

In addition to this myriad of features, it comes with a wire cable the can be wrapped round an anchored object in the room such as a pipe, looped through the anchor lock and secured in place with a coded lock.  It can’t be cut through,
and the bag can’t be removed from the area- I thanked my lucky stars for that cable when
it came to leaving my bag unattended in hostel rooms.

The second item I invested in was the Pacsafe Citysafe Backpack, a super cute day backpack.  Like my larger travel backpack, it has the slashguard built into the fabric, as well as steel cables in the straps to stop thieves from cutting the straps and grabbing the bag from you.

Deep into the side pockets of the bag are carabina-like hooks that the zips hook onto- I struggled for a full 10 minutes to figure out how to unhook them, so God knows how a thief would.  Another really cool feature is that one of the straps is detachable- that is to say, it

unhooks so that when travelling on transport for example, it can be looped around a pole and reattached to the bag.  The security hook also has a ‘lock’ feature on it which makes that little bit harder to detach.

The RFID blocker is another feature I’m sure plenty of people would be interested in due to the wireless technology we use now.  All credit cards and passports have an RFID chip containing your personal information, and with the

help of a reader, thieves can access this information from up to 10 feet away.  Within the bag is a pouch specially designed to block these readers, keeping your information safe.

The coolest thing about this backpack though, is the super hidden secret zip pouch that I failed to find even 3 weeks into owning this backpack.  Hidden behind two other pouches, the zip tucked well into the top of the bag, it allows you to put things into the literal lining of the bag. 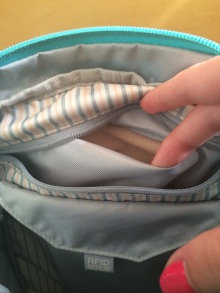 Also, how cute is the colour of this bag?! It’s small enough to not dwarf me which is saying something for someone of only 5’2in height.

The last thing that I chose, which I’ve been coveting ever since seeing it various other travel blogs is the Pacsafe Portable Safe.  A super sturdy bag like item, it again has the slash-guard built in, and a wire which loops around a pole to be reattached to the safe and put it in place with a lock.  It’s big but well worth it if you want to feel at ease when travelling.

The locks were an added advantage; one that doesn’t need a code to be unlocked.  Instead, it comes with two cards; think the ones you use to get into hotel rooms.  They have holes punched into them, and when slipped into the opening on the side of the lock, it unlocks it.

To conclude, Pacsafe are by far the best company to invest in; I have never found another brand that matches it anti-theft features on products.  It’s a little on the expensive side but how I see it is that it’s better to invest in not losing your items in the first place than to pay to have them replaced, am I right?